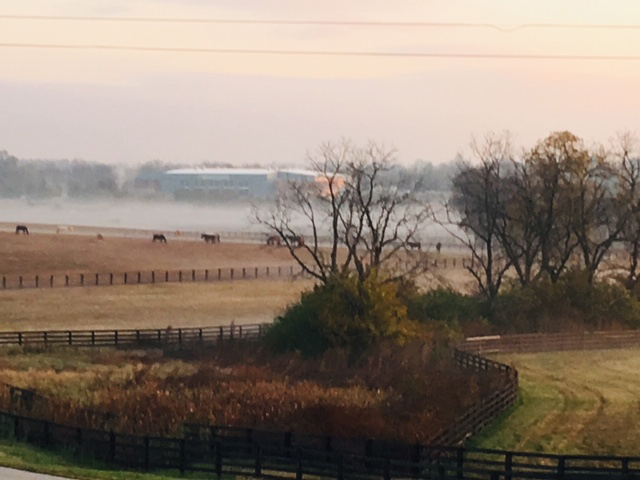 I have lived in Lexington, Kentucky since 1980, so when asked the question what my favorite place in Lexington is, you would think I would know immediately. However, I truly had to think about it, but I kept coming back to the same answer, The Kentucky Horse Park. That seemed like too easy an answer for me. I have worked for two organizations at the Horse Park starting in 1989, the American Saddlebred Horse Association and the United States Dressage Federation. You might not know that there are over 30 horse-related organizations housed at the Kentucky Horse Park.

The Horse Park was one of the first places I visited Lexington in 1979 before I decided to move here. So, even though it seems an easy answer I can’t help it, I love the Kentucky Horse Park. Why? Of course, because it is the Disneyland of horses.

I have the wonderful routine of coming to this place five days a week and it always makes me feel close to horses. There are horses in fields everywhere around us. I have a group of friends who I met while working here that I’ve had lunch with every Tuesday for the last 30 years. I probably feel more a part of this place than anywhere else I have lived or worked.

There is history here in many forms. There have been horses on its grounds for more than 200 years. In the late 1800s Lamon V. Harkness purchased the farm land at public auction. Harkness named the farm Walnut Hall and developed it into one of the largest and best-known Standardbred farms. He built the farm from 450 acres and 12 mares in 1894 to 2,000 acres and 100 mares in 1904. The Big Barn, which is still standing at the park, was built by Harkness in 1897. The Big Barn is 476 feet long, has 52 stalls and a sale area, complete with auctioneer’s block. It was one of the largest horse barns ever built, and construction costs ran to $15,000. This land passed to his daughter, Lela Harkness Edwards, who in turn left it jointly to her daughter, Kate Edwards Nichols, and her daughter-in-law, Mary Edwards. In 1947, they split the farm, with Mary Edwards receiving the section which eventually became the Kentucky Horse Park.

In 1972, Mary Edwards (then Mrs. Sherman Jenney) sold her property to the Commonwealth of Kentucky for $2.7 million, and in 1978, the Kentucky Horse Park, the world’s only park dedicated to man’s relationship with the horse, opened to the public.

I have watched the Horse Park grow through the years, no more so than when the World Equestrian Games were held here in 2010. New stadiums were built, and our parking lot was transformed into a world marketplace for the games. Everyone commented that there was no other venue like it for WEG and even though it was a bit of an inconvenience to get bused into our office, it was amazing to see the competition going on right in front of us.

There are more horse-related activities here than any where else. If you get a chance to visit while in Lexington don’t miss out. I have been here for 30 years and I am still in awe of how beautiful and horsey this place is.

NOTE: The 2020 AHP Equine Media Conference will be held at the Lexington Griffin Gate Marriott Resort & Spa on May 28-30. The hotel offers its guests a daily free shuttle service to the Kentucky Horse Park.