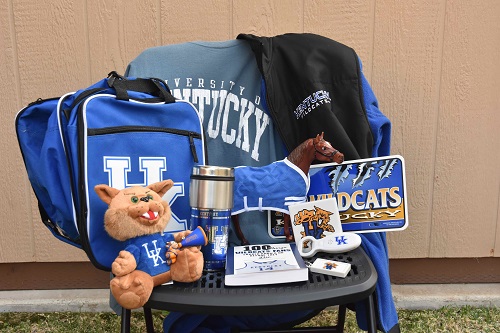 If you think no one will be discussing college basketball in May when AHP meets in Lexington for its 50th anniversary conference, let me tell you a true story.

My sister-in-law Margi didn’t believe me when I told her how obsessed Lexingtonians are with University of Kentucky basketball. To label it a religion isn’t far off the mark.

The year my husband, Jon, and I decided to take his family to Kentucky to see famous horses, I warned Margi that we’d hear some basketball talk during the trip.

We checked into our Lexington hotel after traveling all day from the West Coast and decided to relax at a nearby bar. As we walked in, sure enough, two men were discussing the merits of UK’s team over a beer. Margi just shook her head, dumbfounded.

Lexington residents are proud of UK’s team, as they should be. The team has won eight national titles, and every year it is highly ranked nationally. This year, Kentucky started out #2, beat #1 Michigan State in its first game of the season, and was quickly moved up to #1, though a subsequent loss knocked the team off its pedestal—for now.

Coaches and players are revered in Lexington, perhaps none more so than current coach John Calipari, known as Coach Cal. He annually recruits a stellar group of players, many going on to stardom in the NBA.

I live in the Los Angeles area, and we were thrilled recently when the Los Angeles Lakers traded for Anthony Davis to play with LeBron James, a pairing that is already doing great things. I tell everyone who will listen that Davis came from UK’s program, as do two other Lakers players, Rajon Rondo and DeMarcus Cousins.

Rupp Arena in downtown Lexington regularly sells out for UK home games, and don’t even try to buy season tickets. You pretty much have to inherit them when a relative dies.

UK fans will travel far to support their team too. Jon and I spent a Christmas in Las Vegas a few years ago and were delighted to discover that UK was playing as part of an afternoon doubleheader. Four teams competed, including UCLA from nearby Los Angeles, but UK blue dominated the crowd. For the record, we beat North Carolina 103-100, and Kentucky fans are sure to travel again this December when UK plays two games in Vegas.

We UK fans are a dedicated bunch, something Jon appreciates, since that’s the only time I watch basketball games with him.

He was working in the Santa Anita press box one day, with a UK basketball game on one of the TV monitors. Another man was casually watching the game with Jon and said to him, “The problem with UK is that their fans are insane. They are loud, obnoxious, and arrogant.”

Jon let the guy go on in this vein for a while before turning to him and saying quietly, “I’m married to a UK grad.”

The man never missed a beat, replying, “Then you KNOW what I mean!”

Our dentist in California attended Duke University and is as rabid a Duke fan as I am a UK fan. People can’t believe that I regularly wear UK T-shirts to dental appointments and take every opportunity to cheer on Big Blue. They think I’m living dangerously to risk antagonizing someone who wields a drill. It’s all in good fun, but the dentist got me back when he wore a Duke championship T-shirt in 2015, the year both our teams made it to the Final Four but Duke won it all.

The dentist howled with laughter the year I wore a T-shirt that read: “I still hate Laettner.” The shirt referenced the infamous final shot in 1992 when Duke’s Christian Laettner hit an unbelievable basket from just inside the key right at the buzzer to keep Kentucky out of the Final Four. It’s such an amazing shot that it regularly makes highlight videos—and we UK fans loathe seeing it EVERY SINGLE TIME.

UK’s team is so popular in Lexington that Rupp Arena, which holds 23,500 people, overflows even for practices that are open to the public. People regularly camp out for tickets, and when I was in college, a bunch of us made a party out of standing in line for hours before a game.

Kentucky plays in the always-tough SEC conference, but UK will very likely make it into the NCAA tournament and go far. Like every fan, I hope we win it all, or at least get into the Final Four.

By May the tournament will be history, but don’t be surprised if you hear discussions around town and at the AHP hotel about what the team will be like next year and just what Coach Cal is doing to get us another championship.