Skip to content
Posted on November 5, 2018 by Christine Brune 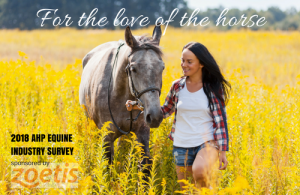 American Horse Publications (AHP) conducted its fourth online nationwide equine industry survey from January 22, 2018, through April 1, 2018.  The survey’s three main objectives are: 1) to gauge participation trends and management practices in the U.S. equine industry; 2) to identify critical issues facing the equine industry as perceived by those who own or manage horses; and 3) to better understand approaches to horse health care. The survey was designed and administered using SurveyMonkey, a web-based survey platform.

Upon conclusion of the survey, 9,629 responses were collected.  After removing responses from 617 participants who did not currently own or manage any horses, there were 9,012 usable responses.  Potential respondents were made aware of the survey through online and print notifications from AHP members as well as via social networking tools such as Facebook and Twitter.  In addition, those providing their email addresses in previous surveys were invited to participate via email. 43.4% of the original 9,629 responses were generated from the email invitation, but it is likely that a greater percentage are previous respondents, since some individuals accessed the survey from the weblink rather than the email invitation.

This report summarizes the results from the five main sections of the survey: respondent demographics, horse ownership, horsekeeping costs, issues facing the equine industry, and horse health care.  Complete results from each question are available on request by AHP members or purchase by a non-member for a fee.

Nearly identical to the previous AHP study in 2015, 92.6% of the respondents are female.

The geographical distribution of responses is relatively uniform.  Respondents are categorized into 10 regions based on the first digit of their reported zip code. Table 1 below provides a description of these “zip code regions”; moving from region 0 to region 9 can loosely be thought of as moving from east to west across the United States.  Figure 1 illustrates these regions for the continental U.S. Alaska (20 respondents) and Hawaii (10) are included in region 9, and respondents from U.S. Territories (5) are included in regions 0 or 9 depending on location. The largest number of responses came from zip code region 9 (15.4%); the smallest number of responses came from zip code region 6, which constitutes 6.7% of the responses.

Respondents were asked to identify the number of horses they currently own and/or manage in four different age groups: foals (less than 1 year old), young horses (1-4 years old), mature horses (5-15 years old), and senior horses (16+ years old).  Respondents in the survey own an average of 0.25 foals, 0.68 young horses, 3.24 mature horses, and 2.37 senior horses, for an overall average of 6.56 horses per respondent. The overall average number of horses owned/managed is nearly identical to the figure in the 2015 survey and less than the average of 7.41 in the 2012 survey. Respondents report owning/managing an average of 2.16 horses each that are idle, retired, or otherwise not working.

Horses Owned/Managed
One of the objectives of this survey is to understand how respondents’ participation with horses and in the horse industry has changed and how they expect it to change in the future.  Initially, the focus is on trends in the number of horses owned and/or managed.

aObtained from the Lincoln Institute of Land Policy (https://datatoolkits.lincolninst.edu/subcenters/land-values/land-prices-by-state.asp)
bObtained from the Missouri Economic Research and Information Center (https://www.missourieconomy.org/indicators/cost_of_living/)
cObtained from Table 8 in the 2012 USDA Census of Agriculture state reports (https://www.agcensus.usda.gov/Publications/2012/Full_Report/Volume_1,_Chapter_1_State_Level/)

Use of Horses
Survey participants were asked to identify all types of activities they used their horses for.  68.6% of the respondents report pleasure/trail riding with their horses, which continues a marginal downward trend since the first survey (73.5% in 2010, 73.0% in 2012, and 71.7% in 2015).  The next most commonly identified “use” is idle, retired, or otherwise not working (31.3%, up from 29.4% in 2015), followed by dressage (27.0%, close to the 27.5% reported in 2015).  Lessons or training (23.0%) is the only other activity that received a response of more than 20%. Among the activities/uses listed in the “other” category, those frequently mentioned include art (such as photography and videography), competitive trail riding, and western dressage.

Competitions
Survey participants indicate that they expect to compete in an average of 5.0 events in 2018, which is slightly less than the 5.4 competitions reported in the 2015 study.  Nearly 40% of the respondents (38.7%) do not plan on competing at all in 2018. Among those expecting to compete at least once, the average expected number of competitions is 8.2. For the third consecutive survey, respondents living in region 7 reported competing significantly more than those in all other geographic locations. In general, the number of competitions increases with income but decreases with age of the respondent.

Preferred Sources of Equine Information
A new question to the survey asked respondents to identify their top three sources for accessing general equine information. Among the options provided, three garnered at least a 60% response: equine magazines (67.0%), company/product websites (65.3%), and social media (60.2%). Many respondents indicated their preference for having an “other” option provided; that will be included the next time the survey is conducted.

Survey participants were asked to identify areas in which costs of horsekeeping had increased the most.  That question was followed up with an opportunity for respondents to indicate potential ways in which they would accommodate any cost increases.

Feed (including both hay and concentrate) was the most frequently identified area in which horsekeeping costs had increased, but the response rate of 57.3% has steadily declined since its peak at 81.8% in the 2012 survey. Feed costs were followed by the costs of veterinary services (41.1%) and animal health products (34.7%). This is the same ranking as the 2015 survey. Fuel received only a 21.6% response rate, down from 71.4% in 2012.

There are no clear geographical trends, but the data suggest that horse owners and managers in different parts of the country have difference management concerns related to keeping horses.

Given that few respondents (11.0%) don’t expect horsekeeping costs to increase in the future, owners and managers will need to utilize different approaches to cope with expected increased costs.  Similar to previous surveys, most respondents (61.6%) indicate that they will reduce expenditures in other areas of their lives to cope with the increased horsekeeping costs.  26.8% of the respondents will consider attending fewer competitions, and 25.1% will pursue opportunities to increase their current income.  20.3% of respondents indicate that they will reduce the number of horses they maintain. These response rates have remained fairly stable across the four AHP surveys.

For the fourth consecutive survey, the issue of unwanted horses was identified by the most respondents as one of the top three issues facing the equine industry (37.8%). However, the percent of respondents selecting this option has fallen significantly since the 2015 study, and in this study, it barely edged out the cost of horsekeeping (36.4%) to maintain the first spot. Two land-related issues, loss of trails and riding areas (29.5%) and competition for open space (27.8%), represent the next two most frequently selected issues.

The unwanted horse issue ranks first for all regions except region 0 and region 9; the cost of horsekeeping is the top-ranked issue and may be a due to these areas having among the highest land prices and cost-of-living indices in the country. Land-related issues also rank highly in most regions. All regions selected lack of education material on horses the least.

Among the respondents reporting "other" deworming frequencies, most indicate that they perform fecal egg count tests and deworm according to the test results. Given this, they didn't feel their response fit neatly into the answer choices provided.

About half of the respondents (49.9%) indicate that their veterinarian is involved in developing their horses’ deworming schedules, which is about the same as the 2015 study. However, after hovering just below 50% in the 2012 and 2015 surveys, nearly 78% of 2018 respondents indicate that their veterinarian has recommended a fecal egg count test, with about 63% actually having had a fecal egg count test performed for at least one horse.

Ivermectin is still the most frequently used dewormer (70.0%), although the percent of respondents using ivermectin has steadily decreased since the 2012 survey. Ivermectin/praziquantel is the second most frequently used dewormer (1.4%), followed by fenbendazole single dose (50.9%). Moxidectin/praziquantel is the only dewormer experiencing increasing use since the 2012 study, standing at 30.5% in this year’s study.

Most respondents purchase deworming products from chain stores (46.4%), followed by online (36.7%) and local feed stores (36.5%). This is a change from the 2015 survey, which again may be due to the clarification on the chain store descriptor. Veterinarians are reported to have the most influence on purchasing dewormers (39.6%). Information from equine media was selected as the second leading influence (18.1%), and price was identified as the third leading influence (17.9%).

The final question of this year’s survey asked respondents if they had utilized any alternative or complementary therapies for their horse(s) in the past year. Almost 60% had utilized at least one form of therapy. The most frequently utilized therapy was chiropractic manipulation (42.8%), followed by massage therapy (32.5%), acupuncture (17.5%), and magnetic therapy (12.3%). Just over 8% of respondents reported using a wide variety of other types of therapies.[2]

Five main results conclusions can be drawn from this year’s study:

According to past and present AHP survey results, nearly ten years removed from the onset of the Great Recession of 2008-2009, the equine industry appears to have firmly stabilized. Industry participants have made great strides in addressing important issues, such as the unwanted horse issue, and now have their sights focused on additional challenges, such as the scarcity of riding areas and open spaces.

[1] In absolute value, correlation coefficient estimates closer to one indicate a stronger linear relationship. A positive (negative) sign indicates that two variables move in the same (opposite) direction.

[2] Thirkell and Hyland (2017) conducted a survey aimed at horse owners in the United Kingdom to investigate the use of complementary and alternative veterinary medicine for equine musculoskeletal disorders. In their study, the three most popular therapies were massage therapy (71%), chiropractic manipulation (58.6%), and magnetic therapy (53.7%)

Full results including the summary report, supplemental data, and charts are available to AHP members on request. Eligible non-members may join AHP to receive the complete survey files as a member benefit or non-members may obtain the complete survey files for a fee of $500. To request the files or order, contact Chris Brune at ahorsepubs@aol.com.

The online survey is made possible by a sponsorship from Zoetis, the leading animal health company dedicated to improving equine wellness, every day. Zoetis has sponsored the survey since its inception in 2009. For additional key survey findings on horse health, read the release from Zoetis: Horse Owners Place Significant Trust in Their Veterinarian, New Survey Reveals

Excerpts from this study must be referenced as “2018 American Horse Publications (AHP) Equine Industry Survey sponsored by Zoetis.”