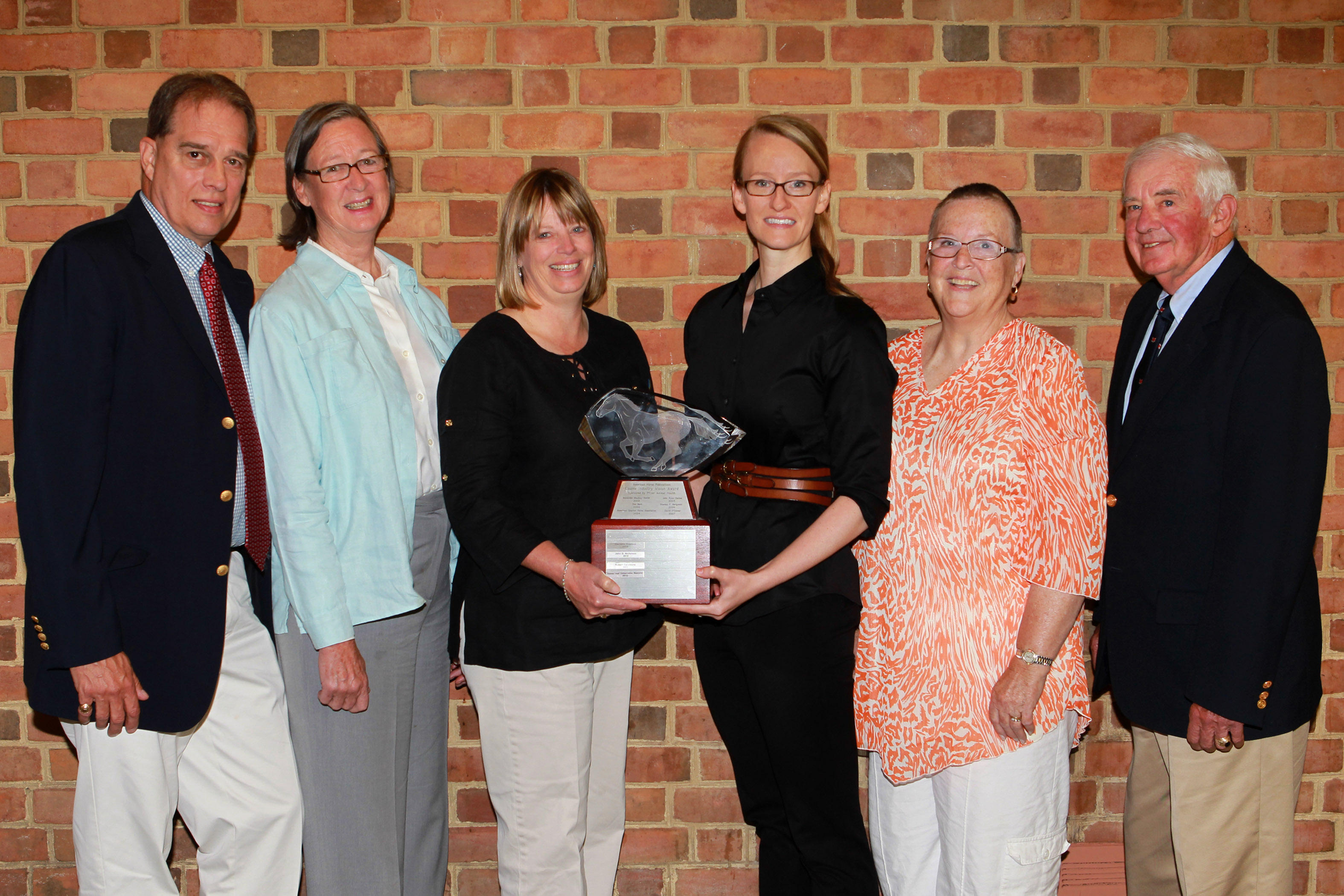 Organization recognized for its dedication to preserve land for equestrian activities

Pfizer Animal Health and American Horse Publications (AHP) are proud to announce that the Equine Land Conservation Resource (ELCR) has been named the recipient of the eleventh annual Equine Industry Vision Award. A truly unique honor, the Equine Industry Vision Award is the first of its kind to showcase innovation across the entire equine market, as well as recognize ingenuity and service. This award was presented to the ELCR’s CEO, Deb Balliet and founder Georgiana Hubbard McCabe, representing ELCR’s four original founders, during a ceremony held on Friday, June 1 at the AHP Ride into History Seminar in Colonial Williamsburg, VA.

“It’s an honor to recognize the ELCR for their vision and dedication to help preserve and protect U.S. land for the future of equestrian sports,” said Kate Russo, Marketing Manager, Cattle and Equine Parasiticides, at Pfizer Animal Health. “The ELCR has made exemplary strides in educating horse owners and organizations on the issues that losing open land can have on the equestrian industry. The work of this organization is imperative to the industry as a whole.”

Founded in 1997, the ELCR was initiated by a group of concerned horse people who recognized that the loss of open land is the greatest threat to the future of all equestrian sports, recreation and industry1. What began as a program within the Conservation Fund, a highly respected conservation organization, became what today the industry recognizes as the national organization to preserve land and promote access for all types of equestrian use.

Across the U.S., the country is losing 6,000 acres of agriculture, forest and other lands each day1. Conservatively, the U.S. needs 36,000,000 acres to feed the estimated 9 million horses in the country1.

Over time, the ELCR has learned that all land is saved locally. ELCR’s vision is to provide horsemen with the tools, resources and networks needed to ensure a viable future for horse-related activity in their own home towns2. ELCR has enlisted 122 equine organizations and corporation as Conservation Partners and their involvement is critical to the success of the mission2. The Conservation partners represent 1.2 million members.

“ELCR is an innovator with a vision and the determination to raise awareness of the land loss issue and to promote the broad array of international resources and experts necessary to ensure land is available for our industry to thrive,” said Don Treadway Jr., Executive Vice President of the American Quarter Horse Association. “As a breed organization, we look to the ELCR as the lead organization on land issues related to equine needs.”

According to the U.S. Census Bureau, the US population is projected to increase to 392 million by 2050 from 308 million in 20102. That represents more than a 50-percent increase from the 1990 population size2. That population growth will be located primarily around urban and suburban centers. A critical issue facing the equestrian community is maintaining the boarding stables, youth riding academies, competition and training spaces, trails and hay suppliers in proximity of the population centers. This accessibility to horse and equine activities within 30 miles of population centers is essential to the future of the equine industry. These urban and suburban participants are the next Olympic champions, race horse trainers and breeders, regional competitors and recreational riders. They’ll also be customers of the suppliers to the equine industry – the veterinarians, clothing and footwear manufacturers, saddle and harness makers, feed and supplement companies.

“Receiving the Equine Industry Vision Award is an honor and a privilege,” said Georgiana Hubbard McCabe, ELCR past president and one of ELCR’s four founders. “To be recognized by our peers for our mission and for the dedication of our friends, partners and supporters to conserve and protect horse lands and the equestrian lifestyle, means the world to us.”

The other finalists for this year’s Equine Industry Vision Award included Michael Blowen, president and founder of Old Friends, retirement farm for pensioned Thoroughbred race horses, Denny Emerson, USEA Hall of Fame member and past president of the USET, and the American Paint Horse Association, which celebrates its 50th anniversary in 2012.