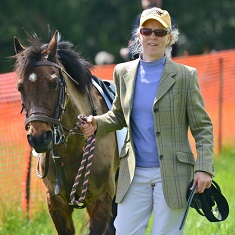 Posted on February 3, 2023 by Christine Brune

After graduating in 1977 with a Bachelors degree in art from Hood College in Maryland, Barrie Briscoe Reightler worked for The Maryland Horse in the advertising department for about a year, but left to pursue her interests in training Thoroughbreds. After a stint with steeplechase horses and galloping at the racetrack, she returned to the Maryland Horse Breeders Association in February 1984 as advertising manager. In 1986, art director was added to her growing list of responsibilities, followed by being named Director of Publications, and then Publisher. Reightler has been at MHBA through the life and death of The Maryland Horse and the creation and success of Mid-Atlantic Thoroughbred. She produces all promotional materials for the MHBA and Maryland Million, supervises and/or maintains four websites for the association. She joined the AHP Board in 1996 and served as President from 2001-2002. Every year since 2001, Reightler has designed the AHP Annual Conference logo and numerous other logos for the association. She earned the Chris Brune Spirit Award in 2006 and was inducted into the AHP Circle of Champions in 2013. In addition, throughout her career at the MHBA she has won countless AHP design awards. She continues to pursue her interest in horses outside of her publishing career, riding her Thoroughbreds daily and currently serves as whipper-in for Mt. Carmel Hounds, an unrecognized fox chasing club in northern Baltimore County, Maryland. Reightler lives in White Hall, Maryland, with her husband Bill Reightler, numerous cats and dogs, and has one adult daughter, Betsy.