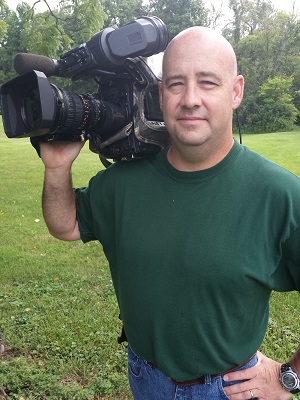 Visual storyteller and professional videographer, Scott Moore, presented a one-day video workshop for AHP members and staff focusing on best practices, tips, and advice on creating and producing visual content for editorial and promotion at the AHP Regional Workshop in Lexington, KY on October 7.

As a Photojournalist in TV news, Moore learned to act fast and move quick. There was always an unplanned event, a deadline and a competitor. He covered the story of people during their greatest moment and many at their loneliest tragedy. Moore learned how to tell a story in less than 90 seconds. That's the most he ever got. Through workshops, seminars and practice every day, he learned how to use natural sound, visual composition and editing techniques to tell a story.

After 10 years in TV news, Moore had become a visual storyteller. He could recognize characters, understood pacing, and knew how to edit well. He was ready to accept a new challenge.

Moore became Broadcast Branch Manager at the Kentucky Department of Fish & Wildlife where for 11 and a half years he shot, edited and produced hunting, fishing and conservation stories for America's longest-running outdoor TV program, "Kentucky Afield TV.”  He was given more time to tell stories, and he became a better storyteller.

After 25 years and over 40 awards in broadcasting, Moore is now his own boss. Today, you'll find him doing the same thing as always, telling someone else's story. He believes that everyone has a story to tell, but they need someone to help them do it and that is what he does for those who need his expertise as a videographer. His recent clients include the hilarious Bluegrass duo, the Moron Brothers, a weekly documentary for Protection Dog Sales, a provider of family protection dogs; Curious Edge, SHYFT Strategies, and R6 Counter Assaults. His passion for his craft and sharing his knowledge with others are the reasons he has conducted seminars for both beginners and professionals on videography.

Living in Kentucky, Moore is accustomed to working around horses. In his news days, he covered the Kentucky Derby many times. He has also worked for the Breeders Cup News Feed and covered events at the Kentucky Horse Park and Keeneland sales. “Breeding stories, retired Derby horse stories, and even horse vet stories; at the end of the day, telling a story is telling a story,” says Moore.