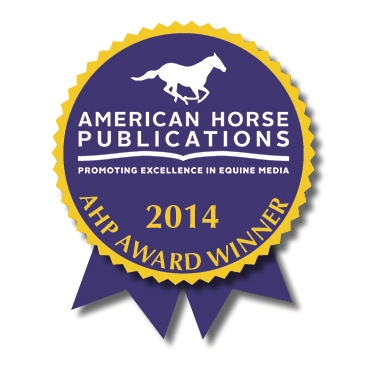 Members of American Horse Publications claimed 192 honors on Saturday, June 20 as the long-anticipated results of the AHP Annual Awards Contest for material published in 2014 were announced.  This year’s competition was judged by 27 professionals and included over 60 classes, 837 entries, and 115 contestants, of which 72 were finalists.  Looking at stats from another angle, 60 first place plaques were awarded, over 300 certificates were presented, and 405 slides were shown at the awards presentation held on closing night of the “Tally-Ho at the Alamo” Seminar. Attendees experienced a jammed-packed three-day educational and networking conference held at the historic Menger Hotel in San Antonio, Texas, on June 18-20, 2015.

AHP members came from all over the United States and Canada to applaud this year’s winners and enjoy a final night with friends, old and new. A reception co-sponsored by Dover Saddlery and i-5 Publishing, publishers of Horse Illustrated, Young Rider and HorseChannel.com, preceded the Awards Banquet sponsored by Zoetis. Breyer Animal Creations provided their 65th Anniversary Edition of Glitterati as a centerpiecs which one lucky attendee at each table took home.

All winners in the five General Excellence classes were eligible for the Overall Publication Award judged by a separate judge. The prestigious award was presented to Driving Digest, a bimonthly publication on driving for every equine.

The judge’s comment stated, “Driving Digest blends clean, balanced design with editorial content that is as compelling and informative as it is simply, well, a hoot to read. While all entries in this class received high marks for their work in meeting the Statement of Purpose, the staff of Driving Digest seems to intuitively recognize that by providing the highest quality editorial content, the magazine is doing precisely that. While the design and layout are solid, it really was the writing and editing that put this entry over the top to earn this well-deserved award.”

Business members who earned first place awards included Ariat International for their “Know Where You Stand” advertising campaign; Kerrits Equestrian Apparel for their website; Manna Pro Products, LLC for their business blog, “Stable Thinking”; Maravilla Productions for their video on The Amish Horseman on Equestrian Nation, SmartPak Equine with firsts in both Business Equine-related eNewsletter and Specialty or Custom Publication; and Washington International Horse Show for their single ad titled “Finally, Something Both Parties Can Agree On.” Other Business members who placed in this division were Freedom Health, LLC/SUCCEED and W. F. Young, Inc. each receiving two honors in two different categories.

Among the AHP freelance members whose work was entered by an AHP publishing media member and placed were Sarah Evers Conrad, Ange Dickson Finn, Tracy Gantz, and Jennifer Whittle.

The Valiant Human-Animal Bond Award sponsored by Luipold Animal Health, manufacturers of Adequan®(Polysulfated Glycosaminoglycan), was presented to the author of the article that best promoted the relationship between horses and people. The award was named for the blind dressage horse, Valiant, owned by Jeanette Sassoon. Valiant passed away in November 2013, however his valiant spirit continues to inspire.

The 2015 winner of the Valiant Human-Animal Bond Award was author Jeanne Albanese, for her article, “Why the Outside of a Horse is Good for the Inside of a Girl,” that was published in New York Horse. Albanese was unable to attend, however she accepted the award with these words.

“I stumbled upon this story through a neighbor, and when I heard that a little girl found her own voice through horseback riding, I knew this was a powerful dynamic and one I wanted to explore. There are so many social and academic pressures facing girls today, and their relationships of unconditional love with their horses offer them an escape from that world for a few hours a day, all the while building the confidence and self-reliance they need to step out of the show ring and back to everyday life to face those challenges.”

The Alltech A+ Equine Journalism Award sponsored by Alltech, was presented to the author of the best article that increased awareness and love of equestrian sport to mainstream readers. Winning the award was Lauren Giannini who wrote the article, “Learning to Fly: Polo Gives Alex Ebel His Wings” published in Sidelines Magazine.

Giannini was unable to be at the presentations because she was attending a memorial service for a dear friend and mentor who influenced her writing career. She accepted the award in honor of Gretchen B. Stephens.

She wrote, “My heartfelt thanks to Dr. Pearse Lyons for the creation of the Alltech A+ Journalism Award and my sincere appreciation for being honored as the winner of this special award for the second consecutive year. From the moment that Sidelines editor, Jan Westmark, asked me to write about Alex Ebel and how polo proved the best possible therapy, I knew that this was a very special story about amazing people and the power of horses to heal.”

The AHP Annual Awards Contest provides members with an opportunity to be recognized for excellence in equine publishing, print and online, as well as professional critiques for improvement. The results of the 2015 AHP Awards Contest are listed in the 2015 Awards Program, available in PDF format as well as a digital edition courtesy of Publishers Press.

AHP congratulates the members who achieved excellence in equine publishing and encourages all communicators to strive for excellence in journalism for the horse industry. Rules for the 2016 Annual Awards Contest for material published in and dated 2015 will be available to members in early January.

American Horse Publications is a non-profit association promoting excellence in equine publishing media. Its members include equine-related print and online media, professionals, students, organizations, and businesses which share an interest in equine publishing.