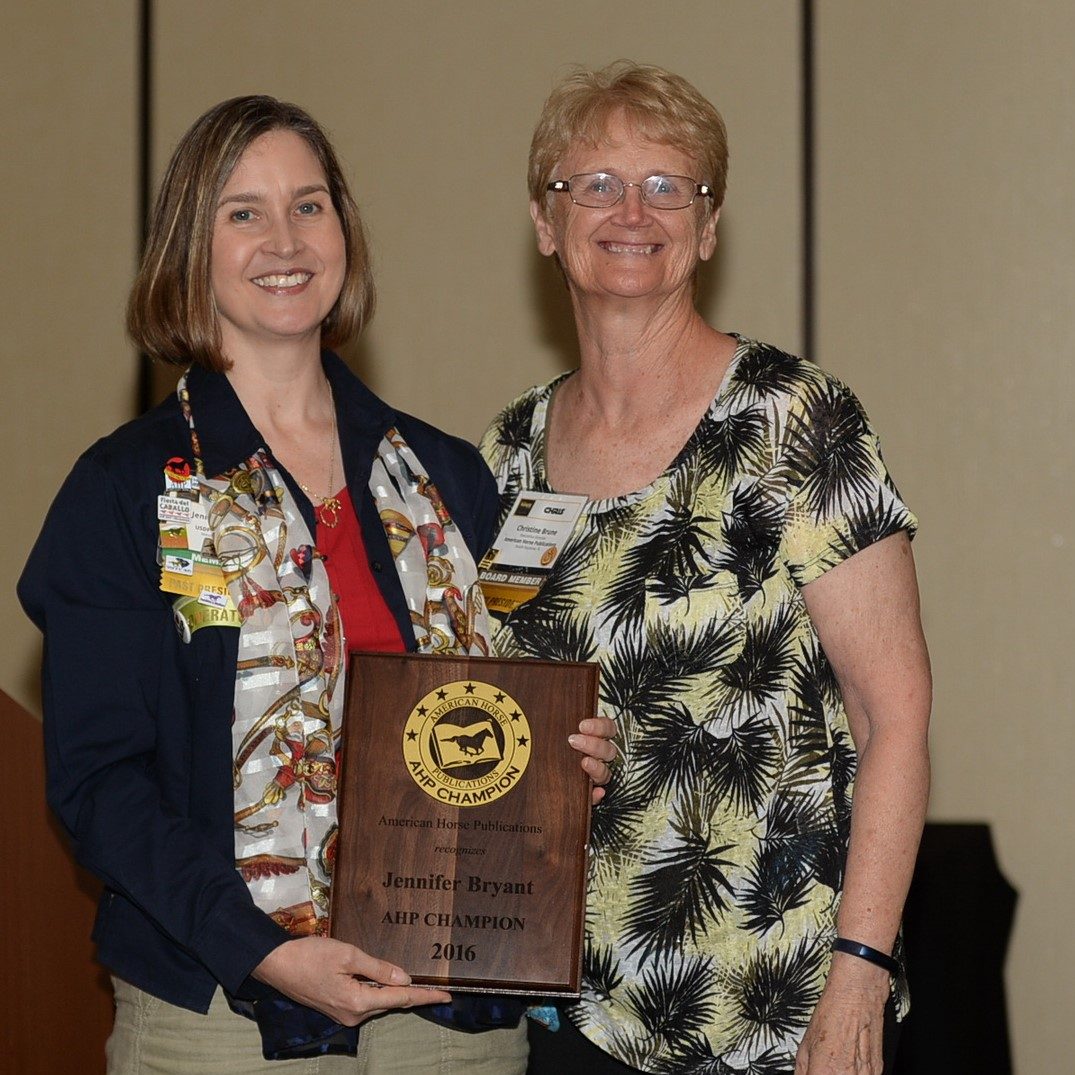 Her publishing career started as an editor of a small regional horse publication. In 1995, she attended her first AHP seminar held in Daytona Beach. “I remember that we held a roundtable discussion where new members could ask for advice from veteran publishers,” says Chris Brune, AHP Executive Director. “Jen arrived at that session with 100 questions. She got her answers and a direction.”

In 1998, Bryant became a full time freelancer determined to earn a respected career writing about horses. In 2001, she continued her freelance business as editor of USDF Connection, a position she still holds today 15 years later.

Bryant is passionate about dressage and has had an opportunity to cover the World Equestrian Games in Kentucky, France and the Olympics in London and Hong Kong. An award-winning editor, writer, author, blogger, and photographer, she identifies with her readers and has built a business for herself as a freelancer.

Five years after her first seminar, Bryant joins the AHP board of directors as its first Individual member. Her mission was to encourage others to follow their dreams in equine publishing. During her 9 years on the board, she actively represented the needs of the freelancer and became their voice.

“In the early days I sometimes felt a little marginalized,” says Bryant, “but the publishing industry and economic changes meant that jobs were changing (or disappearing), and freelancers and independent contractors were on the rise. I tried to represent my ‘constituents’ well and to help all Individual members be regarded as the key content providers and business partners that they are.”

As a past president, Bryant continues to support, mentor and encourage. Sometimes her enthusiasm borders on being a zealot with a cause. But it is that determination and a goal that makes her a champion. “She is a template that many others should aspire to,” says Diana De Rosa, AHP 2016-2017 President and an Individual member.

A large reason for that is because of one woman’s determination. There is no better champion to AHP freelancers than Jen Bryant.

In accepting the AHP Champion award, Bryant says, “I’m still a freelancer today, and AHP is still my second family. Thank you for this award. It’s been a great ride, and I’m not ready to get off yet!”

Since 2007, American Horse Publications has honored 37 individuals as AHP Champions. The 2016 AHP Champion Award presentation and a list of past recipients are available at https://www.americanhorsepubs.org/ahp-champion-award/.