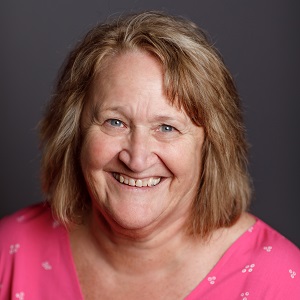 Judy Lincoln’s can do attitude and contagious enthusiasm for AHP and its members shows she’s got the spirit.

Lincoln was surprised with the 2016 AHP Chris Brune Spirit Award at the Special Awards Luncheon on Saturday, June 18, 2016 at the “May the Horse Be with You” Seminar in Orlando, Florida. “Surprising someone who not only works with you, but also lives with you, is a feat, but we did it,” says Chris Brune, AHP Executive Director.

“Judy Lincoln is one of a kind,” says Pat Trowbridge, 2012 Spirit Award Winner and two-time AHP President.  “She has one of the most positive outlooks of life that I know.  I have known Judy for many, many years and she has been one of the most vocal cheerleaders for AHP.  She has such a can do attitude and tackles whatever task given to her.  No matter what, she will get the job done.  She offers an unbiased opinion concerning AHP.  She is always looking out for the betterment of not just AHP but its members.  Judy’s fun and outgoing personality is one of the reasons that she is great to work with.  Judy is so well deserving of this award.  I welcome her with open arms as a member of the Spirit Team.”

“This is so awesome,” says Ellen Kiser, 2007 Spirit Award Winner.  “Judy is priceless and certainly worthy of the Spirit Award. Her enthusiasm is contagious! (I can hear her laugh now.)”

As AHP Administrative Assistant, Lincoln has become one of the most sought-after individuals at the annual seminars, second only to Brune who also happens to be her sister. “She’ll be quick to add “older sister” to any introduction,” says Brune. “It’s just a sibling thing. We’ve worked together for many years, both in the equine publishing business and as co-workers at AHP since 2010.”

Lincoln serves as the coordinator for the AHP Student Programs and Equine Industry Vision Award. She assists with both the annual awards contest and seminar, two of the association’s major projects, in addition to her general office duties.

After graduating from the University of Massachusetts, Dartmouth, Lincoln went to work for Eastern/Western Quarter Horse Journal, where she eventually became Managing Editor. During her 16 years with the magazine, she had the opportunity to be involved with AHP members, awards contests, and seminars. Publisher, Ruth Brown, served as the AHP Executive Director for several years, and Brune, who was the magazine editor for 20 years, managed the awards contest and assisted with seminars.

Prior to joining AHP, Lincoln worked as a Customer Service Representative in the screen-printing industry. 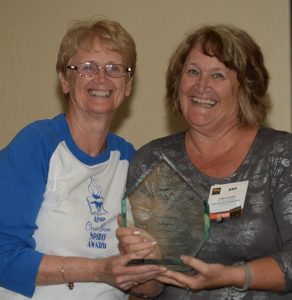 Six years ago when her husband, Gary, retired from his administrative position as a high school principal, the couple left Massachusetts to move to South Daytona, Florida.

Gary has become a familiar figure at AHP seminars assisting with the student fund silent auction and seminar. Both Lincolns have been active participants in the themed events held during the seminar recently playing the roles of Professors Dumbledore and McGonagall at the Horsewarts School of Equine Media student award party in Orlando.

The Lincolns have two children, Matthew, sports director at WPEC, CBS12, and Jessica Zutaut, a speech pathologist. In 2015, the couple joyfully accepted their new role as grandparents to Matt and his wife, Lara's twins, Theo and Scarlett, who live in West Palm Beach, Florida.

The AHP Chris Brune Spirit Award was initiated in 2004 as a way of recognizing the efforts of members and staff other than the Board of Directors. The award was developed to encourage members to seek involvement in the association that would eventually lead to leadership roles. The recipient is an individual who has done the most consistently to assist and support the association. The Board of Directors selects the winner at its board meeting. In 2004, the inaugural award was presented to Chris Brune and the title became the AHP Chris Brune Spirit Award.