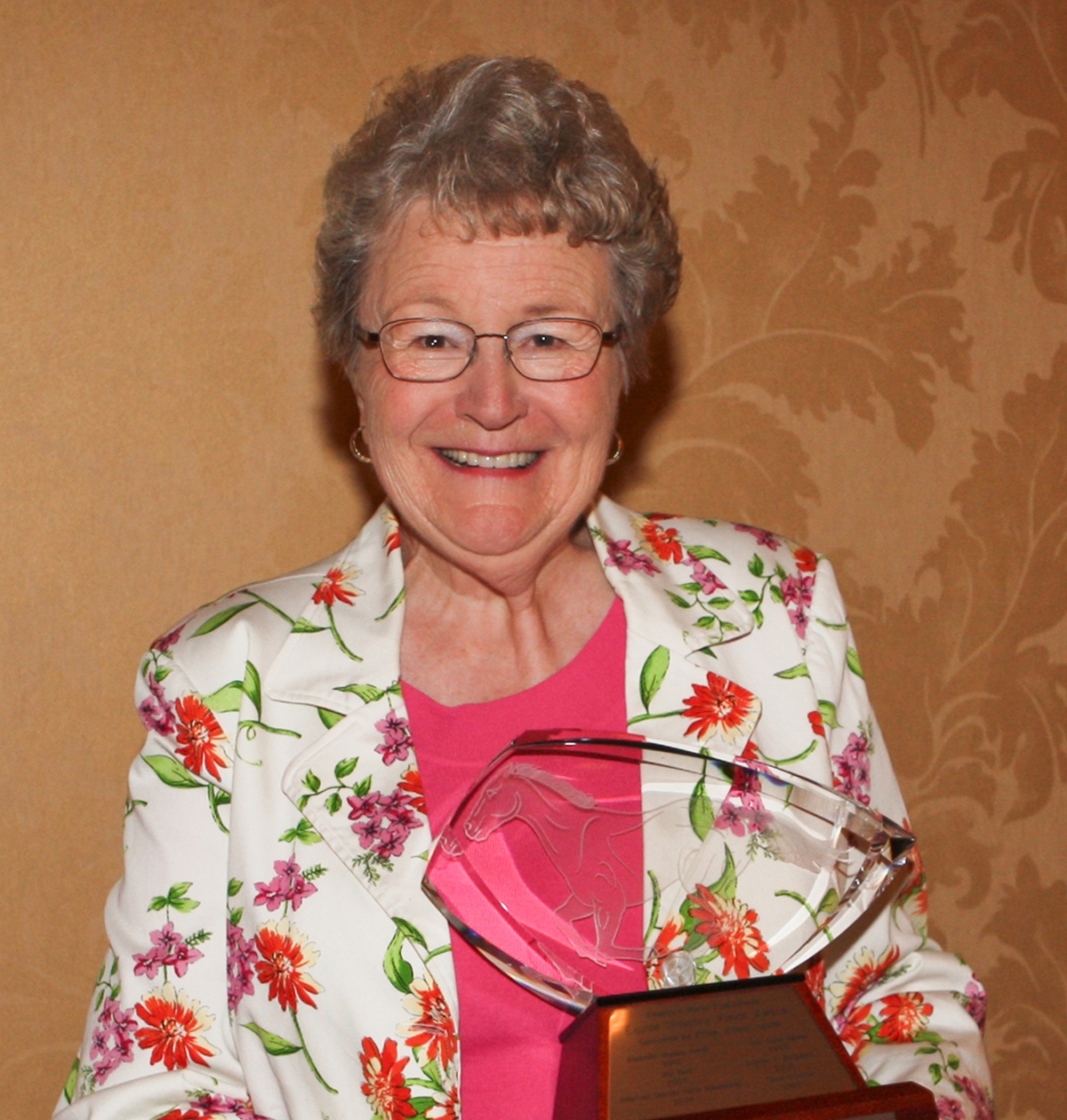 Pfizer Animal Health and American Horse Publications (AHP) presented Charlotte Brailey Kneeland with the eighth annual Equine Industry Vision Award at a ceremonial breakfast held during the AHP 2009 Free Rein in the Big Easy seminar in New Orleans, LA. Established in 2002, the Equine Industry Vision Award was the first of its kind to showcase innovation and recognize ingenuity and service across the entire equine market.

Charlotte earned this honor for her vision to promote and certify riding instructors across the United States. Best known as the founder and director of the American Riding Instructors Association, Charlotte is a true leader who has set an exemplary standard in safety, good teaching practices and professionalism across the horse industry.

“Charlotte Kneeland is an outstanding example of the innovation, vision and leadership that the Equine Industry Vision Award serves to recognize,” said Kristin Ruff, Sr. Marketing Manager at Pfizer Animal Health. “Her insight to start an organization for riding instructors has helped raise the bar in safety, education and integrity across all equestrian sports.”

Charlotte was born in Franklin, NH on October 23, 1941 to Freeman Brailey and Grace Crossman Brailey. Grace was a legal secretary while her father, Freeman, worked full-time on the Boston and Maine Railroad as a diesel mechanic, and part-time as a NH State Policeman and Marine Patrol Officer. He also owned and operated Merrimack Bay Airpark, a grass landing strip and flying school where many people learned to fly after WWII. Charlotte also has two younger sisters, Janet and Joan1.

It was Charlotte’s father who first introduced her to horses. He would lift her up onto the back of her grandfather’s work horse, Babe, as she plowed the fields. It was also Freeman who bought Charlotte her first horse when she was about ten years old1.

“What a thrill – the most exciting day of my life!” said Charlotte1.

Strong values and work ethic were introduced to Charlotte from very early on. Her mother instilled in her the confidence that she could be anything in world that she wanted to be if she just worked hard enough. Grace Brailey also stressed hard work in school, and to “always do a little more than what you have to1.”

“My mother would often say, ‘If you’re feeling down, go out and do something nice for someone else,’ said Charlotte. “She was right – it always worked!”

As Charlotte grew older she couldn’t wait to start working and earning her own money. She sold greeting cards door-to-door when she was 11 and 12, and at 13, she got a job cleaning dog kennels. She rode her bike six miles each way to get there, and earned 25 cents per hour. Throughout high school, she worked at a drug store, a small super market and for the telephone company.

Charlotte attended the University of New Hampshire where she was an English major. She especially loved the school’s riding stable where she got her first real riding instruction. She worked several jobs during her freshmen year. By the end of that year, the school and Charlotte mutually decided that she would be better off out in the real world, putting some of her ideas to work.

One of Charlotte’s many part-time jobs in the early years was buying old saddles that had seen better days, and scrubbing at them for hours until they gleamed, and then reselling them for profit.

“One time a derelict side-saddle showed up,” said Charlotte. “After it was polished, I advertised it and was besieged by calls. Ah, I saw an opportunity! I started buying up more old side-saddles, re-selling them, and after finding a contact in Great Britain, starting importing them as well1.”

Charlotte’s side-saddle business led her to realize that while lots of people were interested in this elegant, but passé style of riding, they didn’t have the knowledge to do it properly, and neither did she. She made it her business to find some of the best, most knowledgeable people in the world – Katherine Illoway, Hope Scott and Mrs. Miles Valentine in the United State, Rosamund Owen in Great Britain, and Lida Fleitmann Bloodgood in Italy. While her co–workers at the telephone company business office spent their coffee breaks and lunch hours relaxing, Charlotte was on the phone, taking notes from these marvelous ladies who had a wealth of knowledge to share. This information became the basis of The International Side-Saddle Organization (ISSO) and Side-Saddle News (SSN), a monthly magazine Charlotte edited and published in March of 1974, and continued until January, 1996, when ISSO and SSN and the shop, The Side-Saddlery, were sold and turned over to new hands1.

Charlotte’s first office was the dining room table. When she outgrew that, her husband Paul took the doors off a bedroom closet and that became her work space. She maintained a little notebook – jotting down on a daily basis what saddles she bought, from whom and for how much, and assigned each saddle an identification number. Then she wrote down the selling price when it was sold. She got much pleasure out of watching her little business grow each month. The business did grow. After just a few months, she was able to quit her service rep position, and a few months later, Paul was able to resign from his high-pressure aerospace management position. They have worked as a team ever since.

The side-saddle business led Charlotte to planning and running side-saddle clinics, horse shows and several Presidential Inaugural parade appearances. She planned and ran The National Side-Saddle Horse Show, an Annual Awards program for ISSO, and wrote the book Side-Saddle Riding for Beginners. Then a Judge/Instructor Certification Program was developed and implemented with good results.

“I called it my ‘conglomerate’!” said Charlotte. “Because I had such a strong vision of what I wanted ARIA and ARICP to be, I purposely did not look into what any other organization had done or was doing. It sprang creatively and originally, and I could not have held it back if I’d wanted to.”

Charlotte has received other honors throughout her career including the 1987 Governor’s Trophy for the New Jersey Horse Person of the Year. In the year 2000, she was named to Practical Horseman magazine’s “The PracHorse 100: 20th Century Salutes the Greats who Shaped our Sport.” However, her most touching rewards are the letters she has received from grateful instructors, who’ve told her that ARIA’s emphasis on wearing approved helmets saved a life – more than once it was a student’s – and for two instructors, it was their own1.

In 2001, when Charlotte first heard that Pfizer Animal Health and AHP had partnered to offer the Equine Industry Vision Award, she read the criteria and told Paul, “Now, that’s one award I’d really love to win. It would mean the world to me1.” However, she never really thought that she had a chance to win, and be among the company of previous winners Don Burt, David O’Connor, Stanley Bergstein, The American Quarter Horse Association, and the late Sally Swift, Alexander Mackey-Smith and John Ryan Gaines.

“Receiving this award is my crowning achievement – it recognizes the philosophy of innovation – not imitation – that I hold dear,” said Charlotte. “It tells me that the creative work of my mind and the physical labor of my body over the last 35 years meant something, and has importance.”

The other finalists for this year’s Equine Industry Vision Award included the Certified Horsemanship Association (CHA), Equestrian Land Conservation Resource (ELCR) and John Nicholson, executive director of the Kentucky Horse Park. Charlotte had three people nominate her – Peggy Brown of Maumee, OH, Susan Harris of Cortland, NY and Judi Whipple of Barre, VT. New for 2009, all non-winning nominations, including finalists, had to be re-nominated.