The AHP Spirit Award was the brainchild of Deborah Taylor Tatum, who saw the award as a way of recognizing the efforts of members other than the Board of Directors. She hoped that this award would encourage members to seek involvement in the association and eventually lead into leadership roles. “Lua is such a special person and the heartbeat of AHP.  She is the person who encouraged me to get involved and become a leader for AHP.  It is a decision that I have never regretted.  I will always be grateful to Lua for her spirit, her kindness, and her friendship.  She has been the selfless kind of leader that has made AHP what it is today,” said Deborah, who served as AHP’s 2004-2005 President.

Initially titled the President’s Spirit Award, this award would be presented to the member who has done the most consistently to assist and support the association. The individual would be selected based on his or her willingness to assist in a volunteer capacity. This could be anyone from any category of membership or a Past President who continues to be actively involved. Nominations come from Board members and the Board of Directors selects the winner at their discretion. The award is a crystal plaque with a special logo designed by Barrie Reightler.

In 2004, the inaugural award was presented to Chris Brune and the title changed to the AHP Chris Brune Spirit Award. Chris was thrilled to see the award given to Lua. She said, “AHP has no better friend than Lua Southard. Her spirit and dedication to AHP has helped to grow our association in a positive and innovative way. She truly believes in paying it forward.”

Over the years, Lua has continually motivated others to get involved in AHP. Doug Hayes, Director of Advertising, The American Quarter Horse Journal, said, “Lua is like your favorite aunt. She is just one of those warm, welcoming people who quietly encourages you to get involved and do your best.”

“I can honestly say that I would not be where I am today if it wasn’t for Lua,” commented Warren Wilson, Publisher of California Horsetrader. “She has always been so helpful and so encouraging. She encouraged me to get more involved with AHP, and she also had great advice for me in helping to grow our business. She’s such a great asset to AHP.”

Lua is CEO of Equine Resources International, LLC, which specializes in marketing and public relations for the equine industry.  She’s been in the business since 1969 and describes herself as “I’m one of the ‘old’ ones with gray hair (as the younger generation puts it).”  ERI has represented Pfizer Animal Health as their equine division public relations firm for about 8 years.  They also serve as an advertising agency for several other clients. Lua is the former the publisher of Practical Horseman magazine and associate publisher for Horse & Rider.  “She has been my best friend, even when we have been competitors,” says Susan Harding, VP, Group Publishing Director, Primedia Equine Network.

Lua first became involved in AHP as Southard & Associates. She was elected to the AHP Board of Directors in 1991 representing Practical Horseman and in 1995 joined the Executive Committee. She served as the 1998-1999 AHP President. Lua has always been actively involved in AHP activities and the association’s most enthusiastic cheerleader continually bringing new members into the AHP family.

She has contributed to all programs and served on many committees, but the two programs she has been most instrumental in developing are the Student Fund Auction and Equine Industry Vision Award. Always the mentor, she has participated at AHP seminars as a speaker, moderator and panelist numerous times. Equine Resources International has been a seminar sponsor since 1998.

Frank Lessiter, Publisher, American Farriers Journal, said, “After only a year or so of belonging to AHP, Lua convinced me to become a board member. She told me it would be a super learning experience and she was right as it led to many great contacts in the industry. If anyone ever had a question or concern in any area of publishing, Lua was always there to provide an answer, a super idea or a valuable thought. Her experience in every area of the equine publishing arena is remarkable. While I thought I had seen over the years much of what she contributed to the success of AHP, it wasn’t until I was president that it finally dawned on me the tremendous asset she was in making the student awards program and the fund raising night at the annual meeting such a big success. That has really been her baby over the years and she’s really made it successful with plenty of hard work. A better person you’ll never find anywhere.” 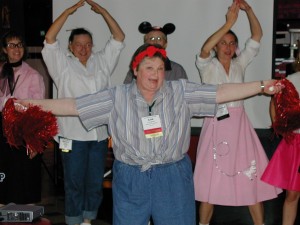 Teresa Avery, Executive Director, Marketing and PR, at Equine Resources International, accepted the award for Lua, who was unable to attend the seminar due to illness. Connie Lechleitner, the AHP 2005-2006 President, said in her presentation speech, “The first person I think of when I think of AHP is Chris Brune. But the second person I think of is Lua. She really does embody the spirit of AHP and has done so much behind the scenes long after her term as AHP president. It is so fitting that Lua is the second recipient of the AHP Spirit Award after Chris. Congratulations, Lua!”

Upon receiving the award, Lua wrote the Board, “What an incredible surprise it was to receive this year’s AHP Chris Brune Spirit Award. I was truly overwhelmed when Teresa pulled it out of her bag. I thought that Dan (Kramer) had taught her a new magic act. Please know that I accept the award and even though this year, I might not have as much spirit as I normally would, watch out for next year as I’ll be coming back strong.”