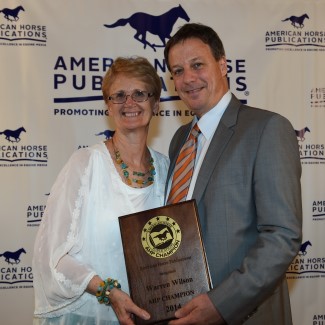 California Horsetrader Publisher Warren Wilson became the 34th AHP Champion during a special Awards Luncheon held on June 21 at the organization’s annual seminar in Charleston, South Carolina. Wilson was recognized for his 25 years in equine publishing that have provided technical innovations bridging the transition from print to Internet.

In addition to founding horsetrader.com in 1997, Wilson led development of online delivery of content as well as web-based business systems for publishers that remain a daily part of companies nationwide. Today, 15 AHP member magazines, websites and corporate members use technology his team developed in the last decade.

First named a Director of the AHP Board in 1995, Wilson served as AHP President in 2000-2001. He led numerous AHP workshops and panels on wide-ranging topics including editorial management, technology, and business development. He started the AHP “Small, But Mighty” workshops for publishers of smaller titles in 2001, and monthly virtual Small, But Mighty meetings continue today.

During the ceremony, Wilson was recognized for his innovation and collaboration. His company’s digital solutions have been shared. In one anecdote of 2006, when fellow AHP Publisher Crystal Brumme Kimball of The Equiery faced an insurmountable obstacle to going to press, she called Wilson, and the Horsetrader team added The Equiery to their web-based system. Almost 3,000 miles away, The Equiery staff was able to make their press date.  Eight years and almost 100 issues later, The Equiery continues to use the Horsetrader’s system. Today’s collaborations extend outside the print realm, as Wilson and the Horsetrader team also now work with non-publishing AHP members including trade shows and associations to engage their audiences with online and mobile marketplaces and video contests.

“Warren has always been that rare individual who’s both eager to learn and willing to share,” said Jennifer Forsberg Meyer, former publisher of California Horse Review. “Warren was just starting out and full of really smart questions. Over the years, he’s evolved into the person people turn to for answers–especially regarding digital solutions–and he’s always been gracious and generous with his time and expertise.”

Before California Horsetrader, Wilson’s publishing career began in newspapers. He was editor of his hometown weekly, the San Marcos Courier, at age 20.  He moved on to a San Diego area morning daily, the Morning Press, first as Sports Editor before being named Managing Editor at age 26.

Upon receiving the AHP Champion Award, Wilson paraphrased Ex-SNL star Garrett Morris. “AHP has been very, very good to me,” he said to the AHP membership. “This award is an honor, and so has been the privilege of being able to call you my peers and my friends.”

“Warren joins a long list of pioneers in AHP’s Circle of Champions,” said Christine Brune, AHP Executive Director. “It was my privilege and honor to present the 2014 AHP Champion award to a true publisher, innovator, and a longtime friend.”