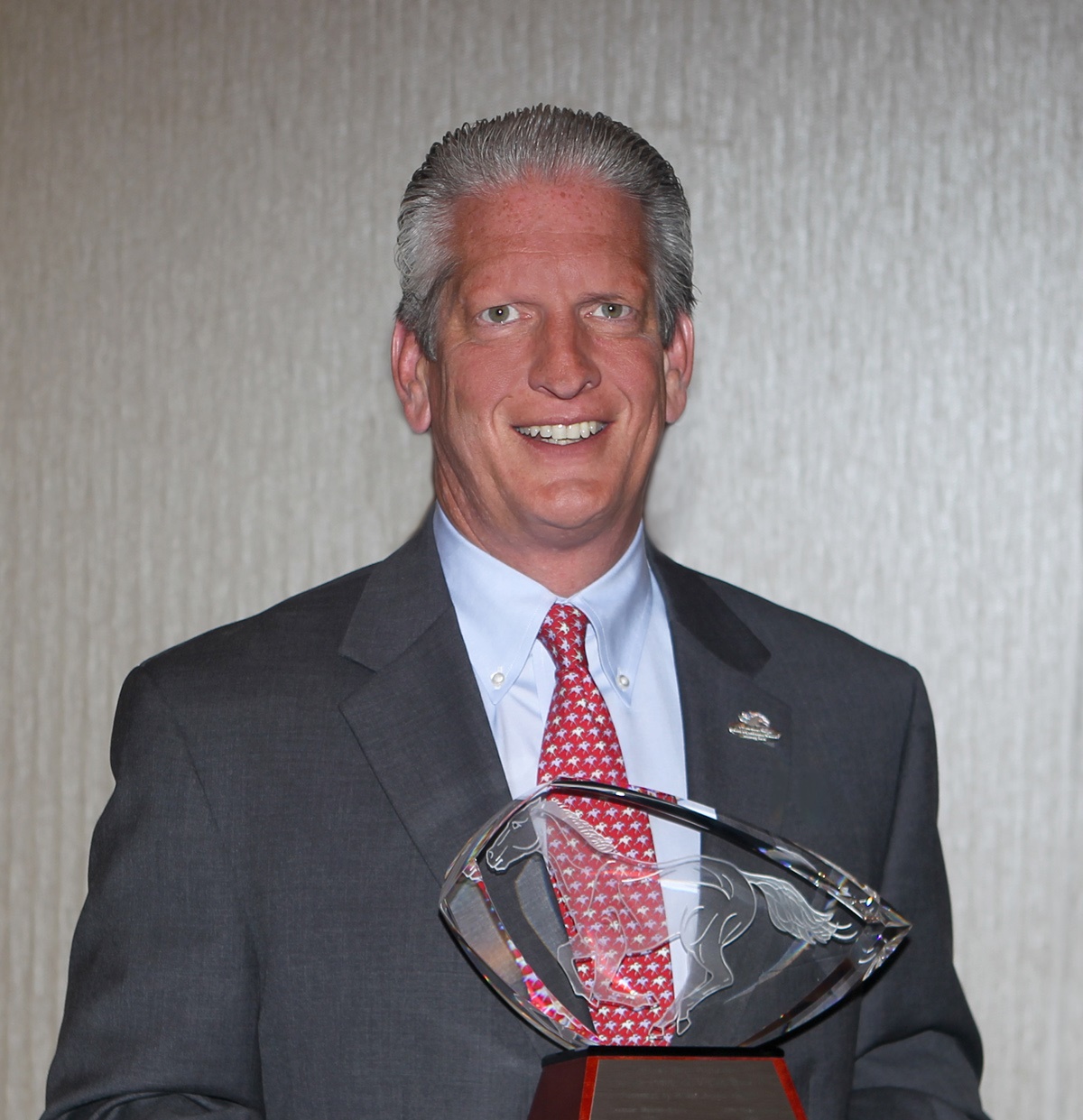 Pfizer Animal Health and American Horse Publications (AHP) presented John Nicholson with the ninth annual Equine Industry Vision Award at a ceremonial breakfast held during the AHP 2010 40th Anniversary Seminar in Lexington, KY. Established in 2002, the Equine Industry Vision Award was the first of its kind to showcase innovation and recognize ingenuity and service across the entire equine market.

John has earned this honor for his vision and determination to make unimaginable dreams a reality. Best known for his work as the Executive Director of the Kentucky Horse Park and the President of the World Equestrian Games 2010 Foundation, John’s leadership has been pivotal in bringing the 2010 Alltech FEI World Equestrian Games to the United States.

“John Nicholson is an outstanding example of the innovation, leadership and vision that the Equine Industry Vision Award serves to recognize,” said Kristin Ruff, Sr. Equine Marketing Manager at Pfizer Animal Health. “His fortitude to bring the Kentucky Horse Park to greatness through the World Equestrian Games and other exceptional exhibits has inspired horse enthusiasts from around the world.”

More than 14 years ago, John had the foresight to begin the process of bringing the World Equestrian Games from Europe to the United States for the first time. In September, the games, featuring 16 events, will be the largest sporting event of any kind in the U.S. in 2010 and will introduce equine sports to a whole new audience across the country

“When we host the 2010 Games, it will be the largest sporting event ever held in Kentucky. The eyes of the world will be on our state as the games will be televised to an international audience of 500 million viewers, and our region will offer its hospitality to 300,000 visitors (700,000 tickets sold), including 2,000 journalists,” said John Nicholson.“This is going to be Kentucky’s ‘day in the sun,’ and with the help of the people of our city and state, we’ll be ready to introduce the world to our unique Bluegrass culture1.”

Bringing the World Equestrian Games to the Kentucky Horse Park is not the only monumental accomplishment for John. Under his leadership as the park’s Executive Director, he has helped transform the park into an unparalleled equestrian competition facility, with a new outdoor stadium which seats 7,000 and a new climate-controlled indoor arena which seats 6,000.  Subsequently Kentucky is on the verge of becoming the Sport Horse Capital of the World, attracting new sport horse owners, trainers and breeders to Lexington, while introducing the state’s die-hard Thoroughbred racing fans to a whole new world of equine sports2.

In addition, John has helped expand the park’s National Horse Center to a current total of 34 national, regional and state organizations. Most of these organizations had never previously coordinated their efforts or worked toward common goals to improve the industry, but through their close proximity at the park, their lobbying abilities and educational efforts have increased2.

Under John’s direction the Kentucky Horse Park has created programs that give back to the industry. The park has expanded its efforts to assist homeless, abused and neglected horses of all breeds through the creation the creation of the John Henry Memorial Equine Adoption Fair, and through a new partnership with the Kentucky Equine Humane Center in which the park accepts horses from the humane center and retrains/rehabilitates the horses to make them more adoptable2.

The park also launched, Help Horses, a program that assists the fundraising efforts of hundreds of non-profit organizations each year. In addition, the park has recently entered into a massive conservation/energy-savings program which will become a model for horse farms and equine facilities across the country, including the installation of a revolutionary muck processing plant which will generate electricity for the park2.

Big dreams and what may seem like impossible feats has never stopped John, nor dissuaded him. He once mentioned during a family dinner that he was going to talk to the Chinese government and ask them to loan the park their terra cotta horses and some other relics that have never been outside of the mainland of China for a special exhibition in the museum. John accomplished this, and Imperial China became the first world-class, blockbuster exhibition at the park1.

After the success of Imperial China, John mentioned during another family dinner that he wanted to ask Queen Elizabeth to loan the park some of the Royal Family’s private collection of equestrian art and artifacts that have never left England. Again he made this happen, and during the opening of All the Queen’s Horses, Princess Anne commented that there were items in that exhibition that even she had never seen prior to that evening1.

In 2010, the park unveiled the latest blockbuster exhibit, A Gift from the Desert: The Art, History and Culture of the Arabian Horse. This is the largest and most extensive collection of Arabian horse art and artifacts ever assembled anywhere in the world2.

Born on September 23, 1959, John grew up in Winchester, KY, with his two older brothers, Joe Browne, President of Nicholson Insurance, and Nick, President of the Keeneland Association. His parents are both deceased, however his mother, Peggy and father, Dr. G.E. Nicholson, an optometrist, have both left a legacy that John is proud of3. As a youngster, he dreamed of becoming a fireman, an astronaut or a policeman1. He exchanged three dreams for one much dearer to him the first time he connected with a horse.

Bill O’Neill was a horse trainer and John’s father’s best friend. To John, he was family. He invited John to spend time at his farm, so as a fourth-grader he began riding his bike to Bwamazon several days a week and got to know every race record, pedigree, and personality of each horse on the farm. This is where the dream’s started1.

At the moment, John calls the Kentucky Horse Park his home, with his two sons, 9-year-old Chris and 5-year-old Colin, and their cat, Mr. Wiggles3. Recently divorced, John cherishes the relationships that have helped get him to where he is.

“I am very fortunate to know that I’m where I am supposed to be. When I walk the fields of the Kentucky Horse Park, I know I’m on hallowed ground,” said John. “The intangible takes on the shape of the tangible when horses and humans connect. There is something very soulful about this place and the relationships between man and horse that are experienced every day. You can’t be on the park and not feel it; it’s other-worldly. You get a strong impression that this special bond is the result of – and still enjoys – the approval of God1.”

The other finalists for this year’s Equine Industry Vision Award included Susan Harris, Michael Blowen and the late Denny Hales.