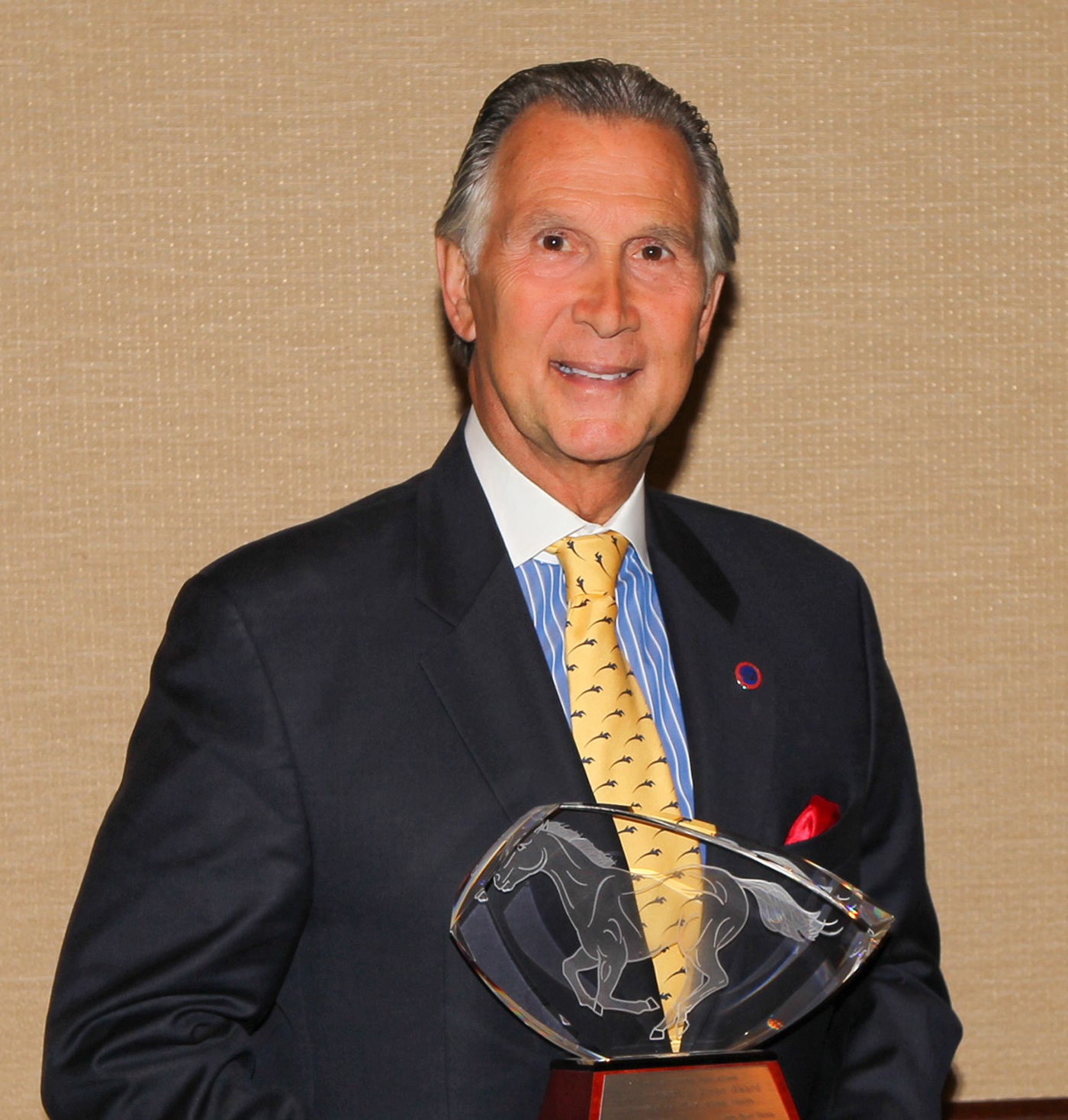 Pfizer Animal Health and American Horse Publications (AHP) presented Robert Cacchione with the tenth annual Equine Industry Vision Award at a ceremonial breakfast held during the AHP 2011 Hoofprints in the Sand Seminar in San Diego, CA. Established in 2002, the Equine Industry Vision Award was the first of its kind to showcase innovation and recognize ingenuity and service across the entire equine market.

Robert has earned this honor for his exemplary vision to start an organization that would allow any college student to participate in horse shows, regardless of financial status or riding level. As Executive Director and Co-Founder, Robert Cacchione is best known for his 44 years of dedication to the Intercollegiate Horse Show Association (IHSA).

“It’s an honor to recognize Robert Cacchione and his outstanding vision and service to the IHSA on the special tenth anniversary of the Equine Industry Vision Award,” said Kristin Ruff, Director at Pfizer Animal Health. “Robert Cacchione and the IHSA have helped transition thousands of young graduates into various segments of the equine industry.”

Anyone who has participated in the IHSA or is familiar with the organization automatically thinks of Robert Cacchione as the two synonymously go hand-in-hand. Robert’s vision began in 1967, while he was a Business Administration major at Fairleigh Dickinson University in New Jersey. Through the campus riding club, Robert met the Dean of the History Department, Jack Fritz. He proposed the idea to Jack of making the sport he loved available to any college student, regardless of gender, experience or financial wherewithal. At the core of Robert’s own passion for riding and keen appreciation for the opportunities made available to him as a young horseman, is his understanding of the horse’s role as a great equalizer. With the concept of a level playing field as his cornerstone, he rallied the support of like-minded individuals from educational institutions first in his region, and ultimately, from throughout the United States. Thus, with Jack Fritz by his side as co-founder, the Intercollegiate Horse Show Association was born.

From five colleges and a handful of riders in that 1966-67 inaugural year of competition, today’s IHSA serves more than 370 participating colleges and universities and 8,700 riders across 47 states and Canada. IHSA alum impact every facet of the equine industry, from U.S. Olympic Show Jumping Medalists, AQHA and NRHA champions, to dedicated talent behind the scenes, in administration and promotional roles overseeing the national goals of breed and discipline associations, and equine welfare.

With 44 years of Robert’s dedication and leadership, the IHSA has had some great milestones. In 1971, Robert arranged for New York Cartier Jewelers to donate the Cartier Cup (valued $32,000) to be awarded for a 20-year period to the IHSA year-end national champion team. In 1984, Robert was named “Man of the Year,” by the Westchester County Horse Council, for his work promoting riding for New York State youth. That same year, the Intercollegiate Equestrian Foundation was incorporated to make scholarships available to select students on the bases of need, academic performance and participation in the IHSA tradition of sportsmanship and enthusiasm. Also, IHSA Nationals held Hunter Seat and Western classes together for the first time.

By 1992, the 25th Anniversary of the IHSA, the organization included 212 colleges in 34 states. The IHSA Board of Directors also began recognizing an Alumni division as integral to the organization. 1996 marked the start of academic awards for IHSA senior students, including Senior Athletic Academic Achievement Award for seniors on an IHSA team with a GPA of 3.5 or better; and in 1997 a Sportsmanship Award was added for outstanding performance by a student, coach, or volunteer at Nationals.

In 2007, Robert and the IHSA board voted to donate a portion of IHSA entry fees from Novice Hunter Seat Equitation on the Flat and Novice Western Horsemanship classes to Ride for the Ribbon, in support of breast cancer research.

In 2010, thanks to Robert’s tireless networking and the board of directors, the IHSA gained affiliation with the U.S. Hunter Jumper Association (USHJA), and launched an IHSA Chapter of the Professional Horsemen’s Association of America (PHA), further increasing the educational and membership benefits available to students and coaches.

“Robert Cacchione is a man of passion and extraordinary work ethic,” said L.A. Pomeroy, Official Media Liaison, Intercollegiate Horse Show Association. “His vision has touched the lives of thousands of students, coaches and volunteers, while changing the scope of intercollegiate competition. Everyone at the IHSA is so proud to share in this life-long achievement with him.”