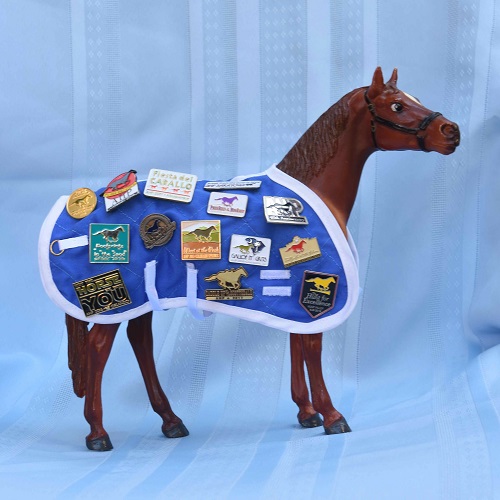 Maybe it was the airlines restricting luggage, thus limiting the amount of swag we could schlep home from AHP conferences. Or maybe Chris Brune took a page out of the fun we had trading Disney pins.

Whatever the impetus, 15 years ago AHP began including commemorative pins as part of the annual conferences. As someone who loves Disney pin trading, I was all in. After all, it was getting harder and harder to board planes after AHP conferences with large stuffed horses—several of which still adorn my home office and make me smile.

My AHP pin collection grew annually. The AHP board every year would solicit suggestions from the membership for conference names that reflected the location of the meeting. Though I dutifully sent in the occasional suggestion, mine were never nearly clever enough. Winners have included Free Rein in the Big Easy to describe New Orleans and Hunt for Excellence to capture Hunt Valley, Md., perfectly. My hometown, San Diego, received the moniker Hoofprints in the Sand. And two visits to Orlando echoed two things near and dear to my heart—Disney parks and Star Wars—with It’s a Horse World After All and May the Horse Be With You.

Barrie Reightler every year incorporates these names into a unique logo. That becomes a lovely pin definitely worth keeping as a memento of the good times and good learning that we experience at every conference.

When Chris started including pins, it was easy to bring back the year’s previous pin and put that and the current conference pin on our name tags. But soon I had also collected a couple of anniversary pins (I can’t wait to see what the 50th anniversary pin will look like), as well as a pin for serving as AHP president. In 2010, I received a very special keepsake pin when I was honored to be included in the AHP Circle of Champions.

I admit I started leaving most of my pins at home. Jennifer Bryant never forgets hers, though, and at one point so many pins crowded her name tag that I doubt anyone could read her name. It was moot—everyone knows Jennifer or meets her soon at any conference. She works a room better than anyone, and she makes sure all newcomers are welcomed.

Jennifer also jumps enthusiastically into any themed party AHP has. I’ve seen her rock a ’50s outfit, dance the Charleston, and become the most authentic member of the Harry Potter universe, not surprising, given her devotion to all things Hogwarts.

My pin collection multiplied to the point where I had to find an extra Disney pin lanyard to hold all of my AHP pins. The lanyard is almost full, with 18 total pins, including a World Equestrian Games pin that isn’t technically an AHP pin. But in 2010 we took a field trip to the Kentucky Horse Park to see the upcoming WEG facilities.

I decided I needed to loan my pin collection to Man o’ War, our 50th anniversary mascot, to show off the pins for this blog post. But I’ve returned them to the lanyard, which is about the only way I will be able to get them to Lexington in May.

I hope all of you will bring your pins to Lexington to help celebrate the rich history of AHP. Don’t worry if your collection doesn’t rival Jennifer’s. Whose does? Each pin you have contains a memory of special AHP times. And if you are relatively new to AHP, get started with your own pin collection. You’ll be glad you did.