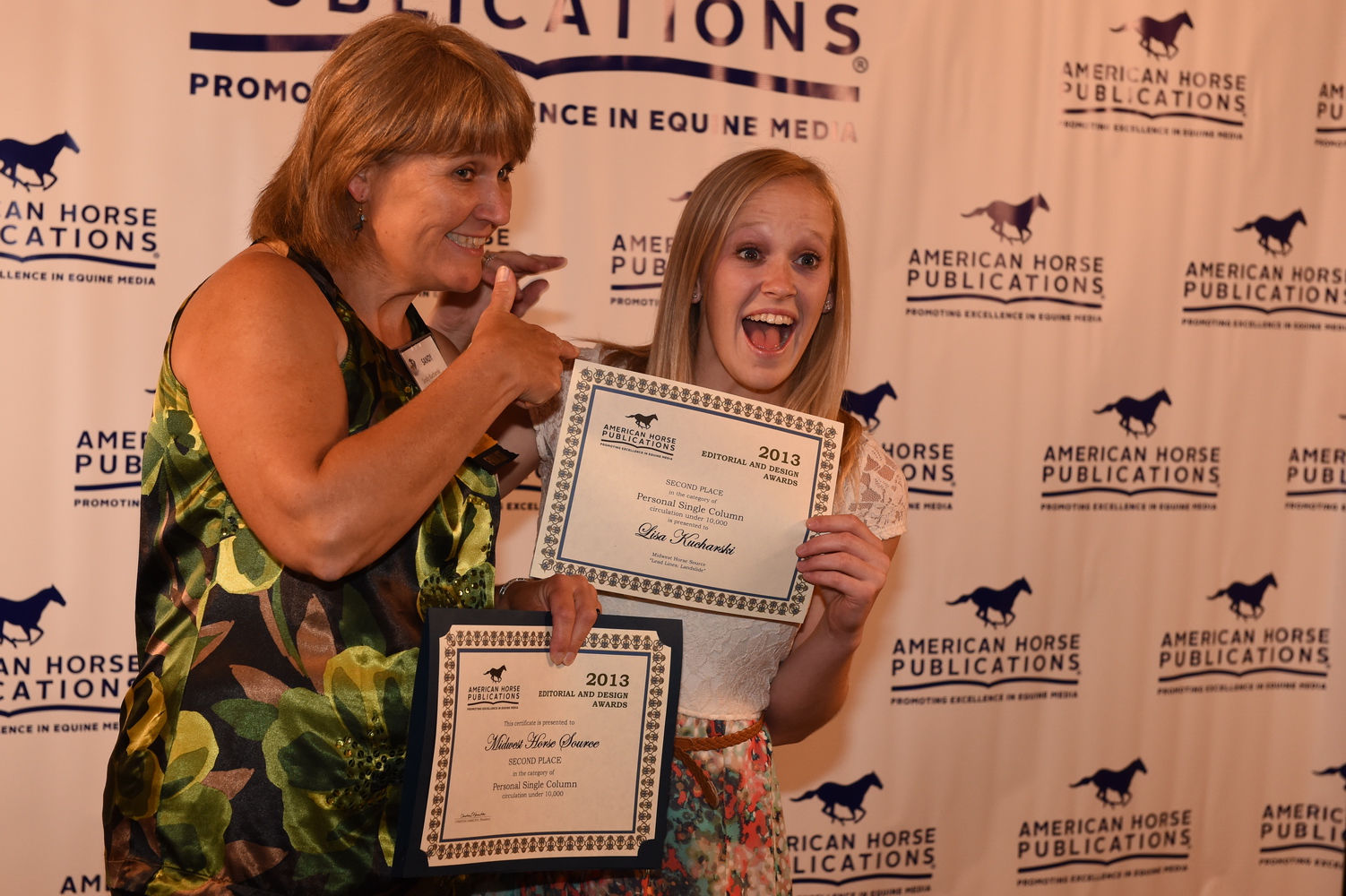 One of the most prestigious awards announced during the AHP conference is the Equine Industry Vision Award sponsored by Zoetis and presented by American Horse Publications. The recipient doesn’t have to be an AHP member, or necessarily in the horse industry, but they must create a “paradigm shift in the perception of the industry.”

This particular award is given to a person or entity who exhibits outstanding leadership, creativity, and meritorious contribution toward positive changes in the horse industry. It’s an opportunity to recognize ingenuity, originality, and effective innovation that exemplifies commitment, dedication, and service to the horse industry, either as one achievement or for continuous positive impacts.

AHP and its members promote the Equine Industry Vision Award nomination deadline online and in their publications. The selection committee chooses the finalists and the AHP Board of Directors and a Zoetis representative vote for the winner. One of the best parts is that the name of the winner is kept secret until the official announcement is made during the Equine Industry Vision Award breakfast where the attendees are introduced to the winner.

It’s always inspiring to see the quality of those nominated and think about all they have contributed to the horse industry. However, there is only one winner, and from the list below, many within the horse industry already know what these pioneers of the horse industry have accomplished. Their ideas, products, services, and/or programs have impacted countless equestrians and set high moral, ethical, and professional standards within this industry.

Information about past Equine Industry Vision Award winners is available online at: https://www.americanhorsepubs.org/equine-industry-vision-award/

One of the most lively and spirited awards given at the conference is the AHP Chris Brune Spirit Award, which recognizes an AHP member or staff who has done the most consistently to assist and support the association. The winner is selected by the AHP Board of Directors.

For those that didn’t attend the inaugural ceremony in 2004, the board managed to surprise Executive Director Chris Brune, who thought she was going to be presenting the award to someone else. I️ imagine it’s extremely hard to surprise the woman who knows about every detail of each conference. But the board did surprise Chris, and it’s such a fitting award for someone who has been the executive director of AHP since 1992. Nobody can match Chris in their dedication, energy, and enthusiasm for AHP. The crowd went wild when she won.

Every year, the Spirit Award team members who are attending the conference enter the room led by Chris and wearing their AHP Spirit Award shirts with their name and the year they won. And then comes the chanting, “We’ve got spirit, yes we do. We’ve got spirit, how about you?” It’s one of my favorite moments of every conference, and it always makes me proud to be a part of this great organization that recognizes those who are dedicated to seeing it succeed.

Every year since 2007, AHP celebrates one or more individuals for their distinguished service to the development and growth of the association with the AHP Champion Award. Put them all together, and these winners form the AHP Circle of Champions.

One of the coolest parts of AHP history is that the AHP Circle of Champions kicked off with the founding members when the AHP Board of Directors recognized the six individuals present at the first organizational meeting of AHP. On September 23, 1969, Arnold Kirkpatrick, Lucille Shuler, Melvin M. Peavey, Don Valliere, Alexander Mackay-Smith, and Snowden Carter created the framework of what has now become the organization to be in if you are in the equine media industry.

To learn more about the legacy champions of AHP, visit https://www.americanhorsepubs.org/ahp-champion-award/

The future of this industry can be found in the various AHP Student Award winners since 1993 and in all of the student members over the years. Some of these Student Award winners have gone on to be editors of publications and also AHP board members and presidents. It’s important for any industry to recognize the value in the up-and-coming stars and to mentor those students along the way. AHP has done just that for the equine media industry. The award helps promote awareness of career opportunities in equine media for interested students that meet the requirements for the award.

The following criteria helps determine the winner: relevant experience, skills and ability, presentation of material, career goals and confidence, and interview skills. Up to three talented students are awarded travel awards to attend the annual conference, where they get to: network with those leading the equine media industry, learn from the best within the industry and from speakers from outside the horse industry, and participate in events such as speed networking and interactive discussions.

Applications are reviewed by a professional judge who selects the Travel Award winners, who each receive a $1,000 cash award presented by American Horse Publications. These finalists will be interviewed during the conference by AHP Executive Board members who will select the Student Award winner. The winner and runners up receive cash awards sponsored by AIM Equine Network.

The award is presented during the Student Award reception held prior to the Friday night event which in 2020 will be the AHP 50th Anniversary party. There couldn’t be a better career move for students than to attend the AHP Equine Media Conference. Being named the AHP Student Award winner is the icing on the cake.

Read about the past Student Award winners whose names may be very familiar. https://www.americanhorsepubs.org/category/awards/student-award-winners/

The final awards given at the AHP conference are the AHP Equine Media Awards (EMAs). These awards, which have been held since 1974, cover dozens of categories for publishing media and individual members in the Publishing Media Division and for business members, non-profits, and colleges in the Business Division.

Awards are given from first place through honorable mention to recognize AHP members for their pursuit of equestrian journalism excellence and for standards in journalistic integrity for informative and engaging content. A large panel of judges are organized every year for hundreds of entries. In 2019, there were 711 entries from 119 contestants across 63 classes.

The AHP Equine Media Awards dinner is the final event of the conference and the biggest draw for many attendees who are finalists. It’s a great evening to celebrate all of the hard work in this industry and to root on friends who are up for an award.

Since the EMA’s offer so many awards every year, check out the 2019 winners and past award programs listing the winners.